If you’re in the market for a new watch but aren’t familiar with the various options available, there’s a good chance that after a quick internet search to understand what it is you want from your new timepiece, you’ve become confused by the terminology and jargon. As with many products, watches span an enormous range when it comes to quality, build and price, from just a few pounds for a market stall fashion watch, all the way up to thousands, or even millions of pounds for a beautifully crafted mechanical timepiece.

How do you know where to start? The two types of watch available utilise either quartz, or mechanical ‘movements’. If you understand the difference between these two fundamental watch ideas, then you’ll be better positioned to decide which one is best for you. So, without wasting any further time…what exactly do these terms mean?

First, let’s look at watches powered by batteries. Also known as quartz watches, battery powered watches make up approximately 90% of those available on the market. They contain a tiny quartz crystal which, when a current from a battery is passed through, vibrates at a very precise frequency each second. A microchip circuit converts these vibrations into regular pulses – one every second. These pulses then drive an electronic motor, which finally turns the gears in the mechanism to propel the watch’s hands.

Watches that work without a battery are known as ‘mechanical’ which, as the name suggests, use purely mechanical components to keep time. These watches use energy stored in a wound spring, which is slowly released as the spring unwinds, through a set of gears, which turns the mechanism in the piece and drives the movement of the hands. 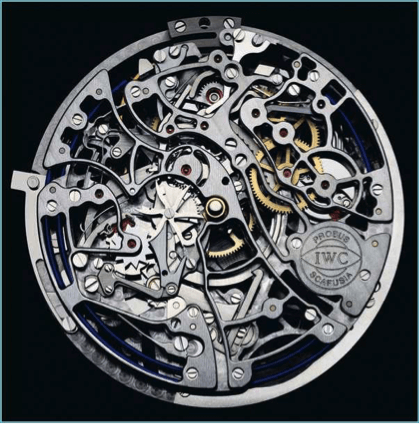 Under the heading of mechanical watches, there exists two further categories: manual and self-winding. With manual watches, the wearer must physically turn the crown on the watch in order to tighten the spring. However, self-winding (confusingly, also known as automatic) watches do exactly as their name implies – a rotor turns as the wearer’s wrist moves, which in turn winds the spring.

Pros and Cons: Battery Vs Mechanical

Now we’ve looked at the different movements that are available, the next question is, what are the benefits and drawbacks of each watch type?

The batteries in quartz watches can last for several years; a manual watch will need to be wound once every couple of days, depending on the model. Self-winding watches will run indefinitely as long as they remain on the wearer’s wrist (or if they are stored on a watch winder, which keeps the watch moving when it is not being worn and therefore keeps the spring wound).

Quartz watches are typically more affordable, with less maintenance required (just a battery change every few years) whereas mechanical watches are often seen as being things of beauty. They are associated with craftsmanship and the skill taken to put them together, containing dozens of extremely intricate parts assembled by master watchmakers. Servicing will be required on the moving parts every couple of years which represents an ongoing maintenance cost. These days, however, there are extremely affordable automatic watches available on the market (in the same way that there are also expensive battery-powered watches).

Conversely, because battery-powered watches lack the depth required by the mechanisms in their mechanical counterparts, they can be a lot slimmer (sometimes as thin as 1 mm) which affords designers more scope for aesthetic variations.

Quartz watches are also typically more accurate, varying by only a few seconds each month. This is because of the precise vibrations of the crystal. As mechanical watches consist of hundreds of intricate moving parts powered by a mainspring, there is more scope for inaccuracies over time.

So what does the choice come down to? In the end, your own budget, taste, and intended use (for example if you wear it sporadically, a mechanical watch will have stopped by the time you put it back on). There are benefits and drawbacks to both quartz and mechanical watches but it isn’t a case of one being better than the other. You can find beautiful examples of both kinds of movement on the market – it’s just a matter of choosing the watch that’s right for you. You’ll know it when you see it.